For some unknown reason I decided that I wanted to try to see if I could make my own version of the sugarveil icing that you can spread out and use like a fabric. The reason is unknown because I didn't need to use it on a cake, have no plans to use it, and will probably never need it. I was just curious about what the heck it was.

Since it's a labelled product you can look up the ingredients to the actual stuff then reverse engineer it. Between the label and the registered patent, you can figure it out pretty easily. Since it called for some very specific brands of ingredients that I didn't feel like chasing down, though, I just looked into the principles behind it.

I'll say, first of all, that it's going to be easier to just go buy some sugarveil if you really want to use it. It's been tested and measured out for you, and there's no planning involved. But if you're interested in the mystery of it, read on.

If you look at the ingredients it's pretty easy to see that it's basically a version of royal icing with some gums and an invert sugar added. Kind of like some marshmallow recipes.

I've seen recipes that include a bunch of marshmallows, but there's nothing on the label that would indicate that. No gelatin in the ingredient list, just xanthan gum. There are a ton of recipes for flexible icing that you can find, but they're usually marshmallow related.

I decided to stick as close to the label as I could, just to see if it would work. Well, starting with a royal icing didn't work the first time. It just ended up being too runny and I could tell it just wasn't going to ever set up.

What I didn't know was that you have to let sugarveil sit for a while before using it, which I hadn't done. I don't know if that would have made a difference, but it might have. When I came back to it the next day it was a lot stiffer, but at that point I had already decided to add some tylose to it to stiffen it up.

So I used 3/4 cup of the original and added some tylose gum glue to it. That ended up being pipeable, and it peeled off a lace mold that I had and also ended up being pliable enough to act like a sheet of fabric. It's not sticky, but it still feels rubbery and creepy. 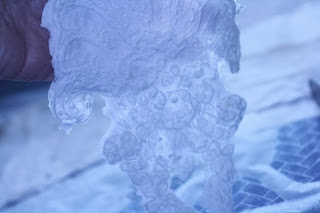 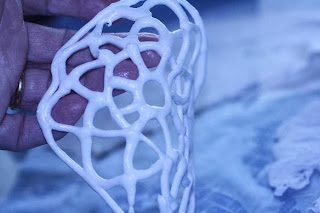 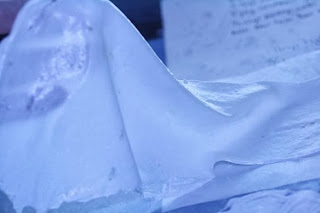 One interesting note is that when I first put this stuff on the waxed paper I didn't think it would set up, so I tried a third version that was more of an unbreakable gel with some other stuff thrown in. That ended up drying out fine, but it wasn't as white and was nastier as far as texture goes.

So if, for some unknown reason, I had to make this, I'd use this recipe. You might need to either increase or decrease the tylose depending on your humidity. I've also heard that humidity is the one thing that will really do this stuff in, so don't plan on using it on a cake in humid weather unless you test it out first.

Put the first three ingredients into the bowl of a stand mixer and add the boiling water. Beat for 1 minute on low then 3-4 minutes on medium-high.

Let this sit overnight. That's your base mixture.

The next day, turn the mixer on low with 3/4 cup of your base mixture in it. Add the tylose by sprinkling it on the surface of the mixture while the beater is turning. Mix well, then add up to 1/2 cup water if necessary to get it to a piping texture, not thin enough to really spread out, but not too thick to spread with a spatula. If you make it and the tylose clumps up, strain it before using it.

Pipe this onto waxed paper that's been greased up with crisco. Dry waxed paper won't release it, so make sure to grease it first. Let it set up overnight or longer, until it's ready to be pulled off of the paper without tearing or feeling wet.

Experiment with this, maybe add more or less tylose or xanthan gum, it's up to you. 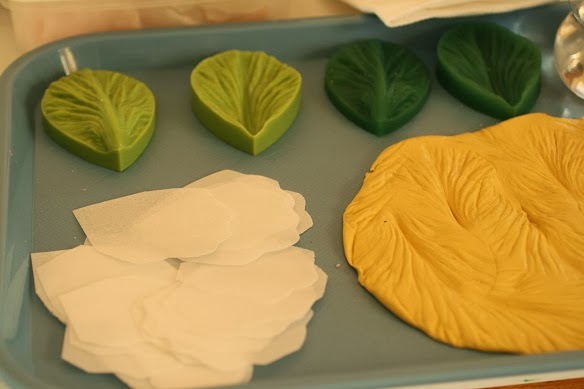 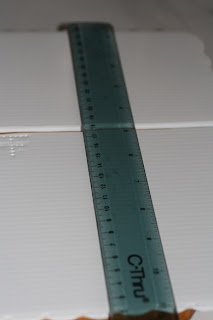